Microsoft is reportedly working on a Windows 10 Pro version that is optimized for workstations. The OS should be able to run on PCs with 4 CPUs and features Microsoft’s ReFS file system. 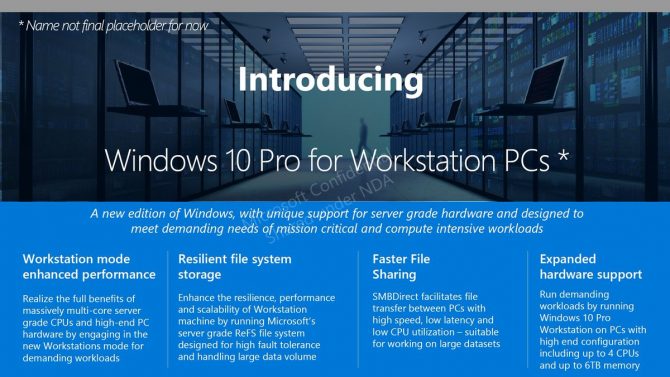 The workstation optimized version of Windows 10 will be called ‘Windows 10 Pro for Workstation PCs’, according to slides that were made available by a Twitter user. This user responded to other users who were analyzing an internal Windows 10 build, ‘Pro for Advanced PCs’, which Microsoft accidently released to testers.

Microsoft plans to add a special Workstation mode that should make sure the system performs at its maximum on heavy workloads. The ReFS filesystem should make the OS handle large datasets better. ReFS is already in use in Windows Server 2012 and 2016 and was designed to be next generation file system after NTFS. 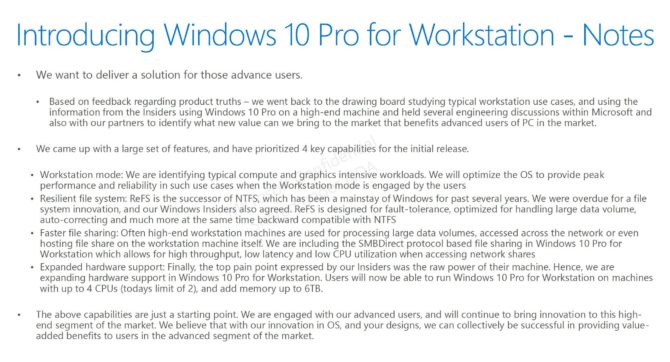 Windows 10 Pro for Workstation PCs will also feature the SMB Direct protocol that should speed up file transfers due to low latency and low CPU load. The OS should also run on systems with 4 CPUs, currently Windows 10 can handle up to 2 CPUs.

The Workstation version of Windows 10 is developed after feedback of power users and the mentioned features should only be start, more high-end functionality is expected. It’s however unknown when Windows 10 Pro for Workstation PCs will be officially announced.