In addition to new features of the Windows 10 Fall Creators update, some users may notice that Windows now logs in quicker.  The desktop may even instantly appear after logging in.

Initially I thought that Microsoft improved the logon process until I received an unexpected sign-in request on my mobile one day at work.  I switched on my PC and headed out for a few minutes.  While away from my desk, my mobile bleeped asking to approve a sign-in request, which got me concerned.  I headed straight back to my desk, logged in and saw OneDrive showing the awaiting sign-in approval screen.

Prior to the Fall Creators update (version 1709), OneDrive did not automatically sign in until I logged into Windows.  To test whether this was just OneDrive or Windows discretely logging in, I created a simple batch file that displays the current time and added it to the Windows start-up folder.  I rebooted the computer and left it at the Windows logon screen for several minutes.  When I signed into Windows, the batch file clearly started several minutes earlier:

On a computer with multiple user accounts, Windows will automatically log into the last user account that shutdown or restarted the PC, while displaying the password screen.  If another user logs in, Windows will give the impression that the previous user had already signed in.  This is particularly noticeable when that user later shuts down the computer and gets this surprise: 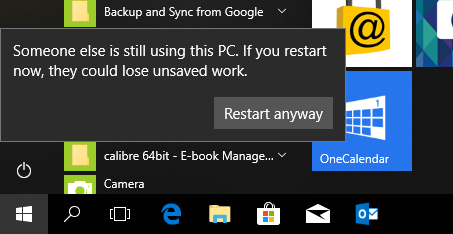 Although this new feature may be convenient, it is worth checking what software launches when signing into Windows, particularly on PCs with multiple user accounts.  For example, chat software such as Skype and Yahoo Messenger that automatically signs in will show the user as online.  This can be an issue on a multi-user PC where another user signs in.  If the last user’s account has chat software that signs in automatically, it give the impression that this last user has come online, which would not happen before the Fall Creators update.

From further testing, Windows version 1703 does not automatically log in the last user in the background, unless a user account has no password.  According to this thread on TenForums, the Fall Creators update also disabled a registry key that prevented a password-free account from automatically signing in.