In October (2016), Samsung unleashed the mighty 960 Pro, a
high performance enthusiast class SSD. Today I’m looking at the mainstream
version of the 960, the 960 EVO. The 960 EVO uses the same Polaris SSD
controller as the 960 Pro, but the EVO utilises 3D V-NAND in a TLC
configuration. 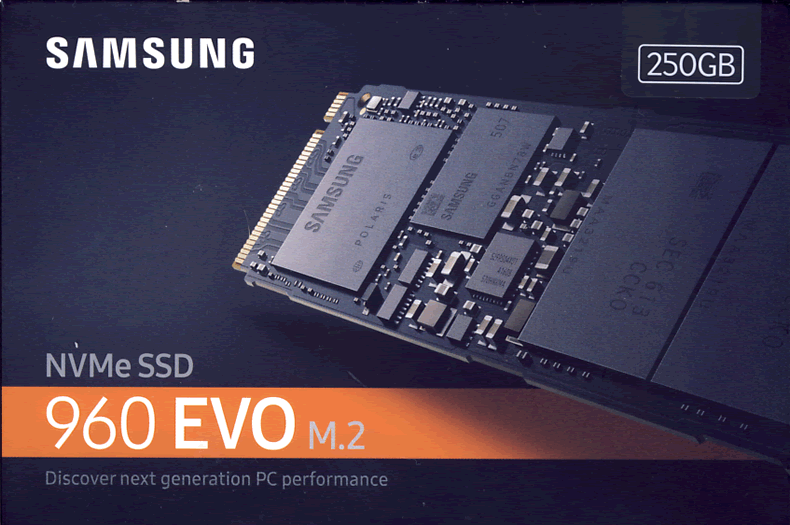 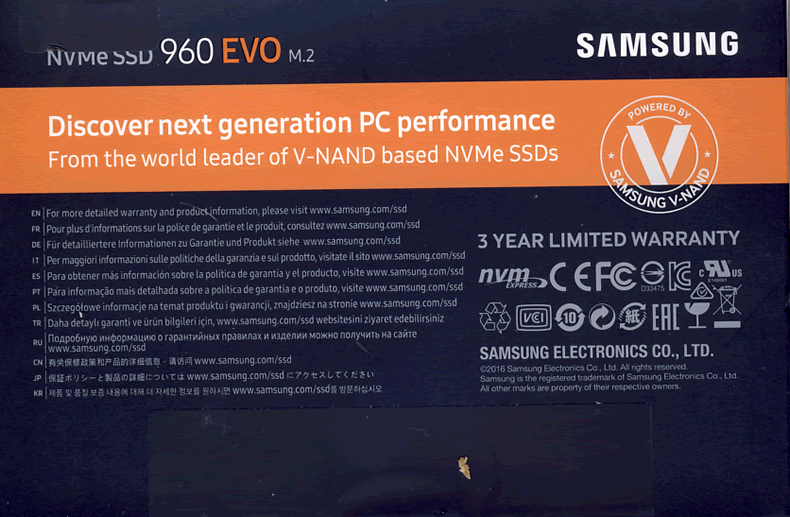 The Samsung 960 EVO M.2 NVMe SSD utilises the brand new
Samsung Polaris SSD controller, of which very little is known, with Samsung’s 3rd
generation 3 bits per cell 3D V-NAND, and in the case of the 250GB and 500GB
versions 512MB of LPDDR3 DRAM. The 1TB version has 1GB of LPDDR3 DRAM.

In keeping with other Samsung SSDs, that use 3 bits per cell
NAND, the Samsung 960 EVO utilises an area of NAND which emulates SLC NAND, and
the size of this area is dynamically allocated. In the case of the 250GB
version, the maximum size of this area is 13GB on the 250GB model. See the
table below for the other 960 EVO models.

Once the emulated SLC area is exhausted, write speed is
reduced substantially on the 250GB model. We will find out later in this
article if there is any impact on real world performance, once all the emulated
SLC is exhausted.

As well as the new Polaris SSD controller and V-NAND,
Samsung has addressed the thermal throttling that some people had observed with
the Samsung 950 Pro. Samsung’s solution to this was to fit copper labels across
the controller, the V-NAND, and the rear of the SSD, to act as heat spreaders.
We shall see how effective this solution is later in this article.

Getting the best performance from the Samsung 960 EVO will
require a native Hyper M.2 socket supporting PCIe gen3 x4. These are found on most
Z170, Z270 chipset, and X99 chipset motherboards.

For Windows 7, Windows 8, and Windows 10 users, and some
distributions of Linux, the Samsung 960 EVO SSD supports TRIM to keep the NAND
clean. The Samsung 960 EVO also has advanced garbage collection to clean the
NAND during drive idle periods.

New for the 960 series of SSDs is a fresh version of the
Magician software, version 5. 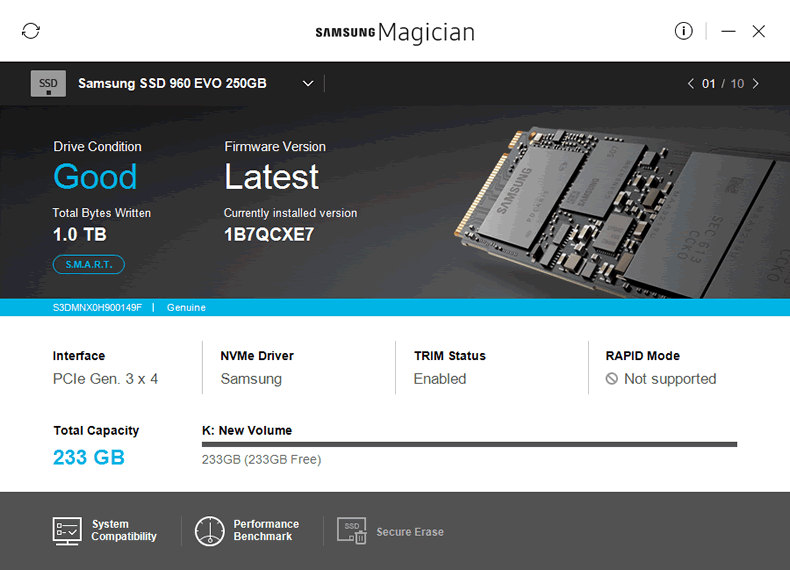 The SSD Magician software allows the user to maintain the
SSD, and has the following features. 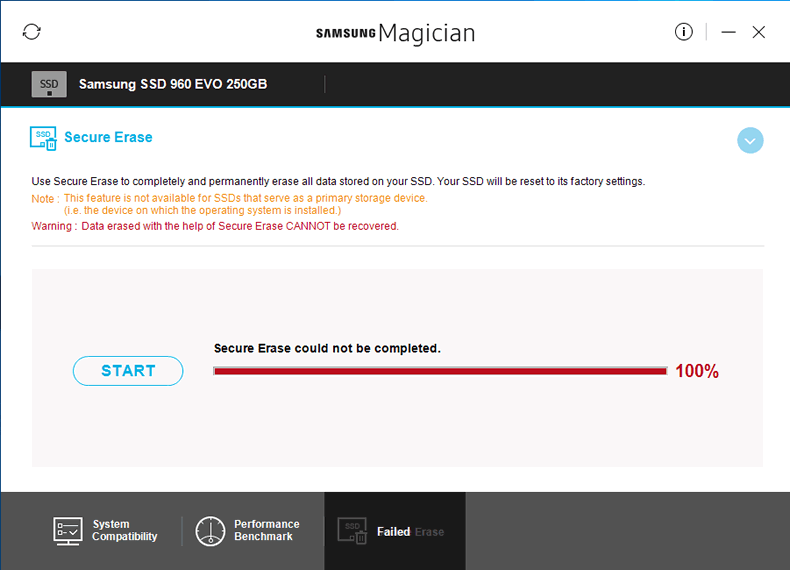 Data migration software is also available as a download from
Samsung, which allows you to easily migrate your existing system installation
over to your new SSD. 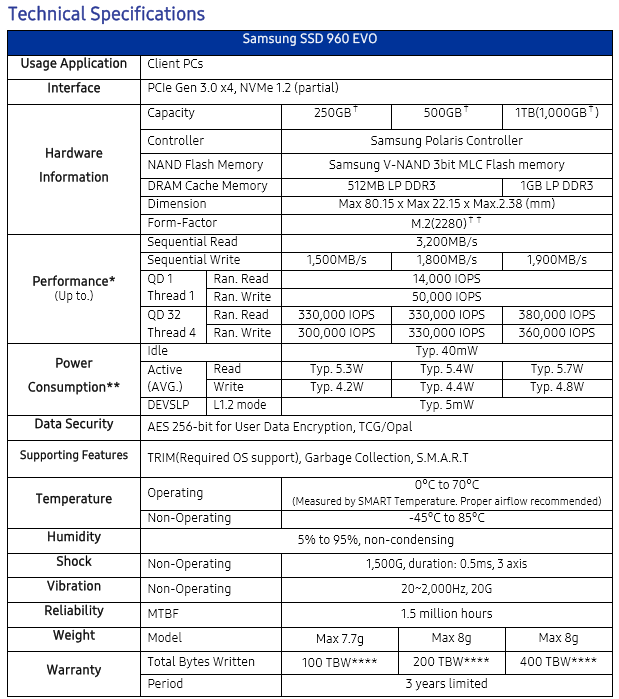 Does the SSD support TRIM?

To allow TRIM to function you first need an SSD that
supports the TRIM command. You then need a storage stack that will allow the
TRIM command to pass-through to the SSD, and this includes the driver.

Thankfully this is now very easy to check with some degree
of reliability, using a small utility written by Vladimir Panteleev called TRIMCheck. 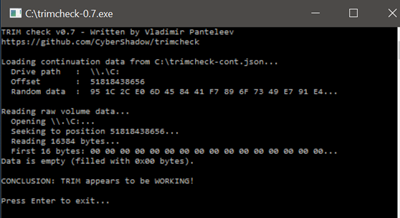 According to TRIMCheck, TRIM is functioning correctly on the
Samsung 960 EVO M.2 NVMe 250GB SSD.

Let’s head to the next page where we take a look at our
testing methods and the review PC….