Investigation of an online printer ink retailer shows that HP has programmed a date in its printer firmware on which unofficial non-HP cartridges would fail. Thousands of HP printers around the world started to show error messages on the same day, the 13th of September 2016. 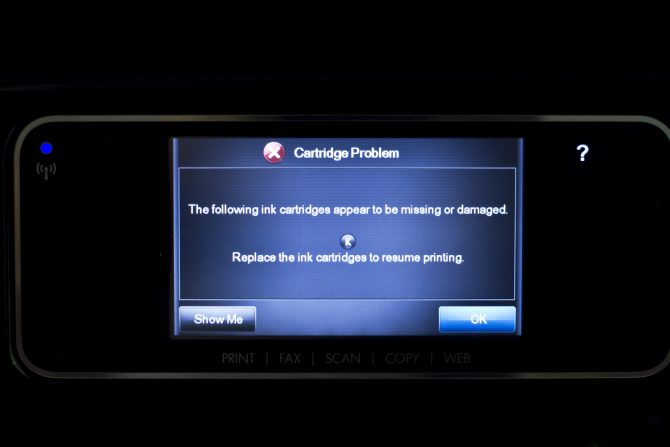 On that date HP printers with non-HP cartridges started to show the error message, “One or more cartridges appear to be damaged. Remove them and replace them with new cartridges“. On HP’s support forums numerous complaints were posted and Dutch online retailer 123inkt also received a large amount of complaints on that day and decided to investigate the issue.

After an investigation on their test printers they found a large scale issue with their private label brand cartridges with several HP printers. When they emailed their customers asking them if they wanted to check if their printer also had issues, they received replies from more than 1,000 customers confirming the issue.

Further investigation with many printer models showed the issue resided in the firmware of the printers and 123inkt.nl contacted HP about the issue. HP stated it wasn’t aware of the issue. Consumers who complained to HP were told the error was caused by using  non-HP cartridges. A day later HP withdrew that statement and explained the issues were a side effect of an firmware update.

Therefore it’s very unlikely that a firmware update caused the issues and the only other logical explanation is that HP programmed a date in its firmware on which non-HP cartridges would no longer be accepted.

When 123inkt contacted the supplier of their private label cartridges, they also confirmed the issue. The private label supplier started to work on a solution and for several HP printers they developed new chips which are currently in production.

On its website 123inkt concludes, “This problem is not unique. Printer manufacturers regularly release firmware updates which are said to enhance the printer’s performance or address security issues. The (un) intended result, however, is that the use of cheaper private label cartridges is made difficult and / or that error messages are caused. This time the problem was not the result of an update to improve the operation of the printer, but HP apparently programmed a date in its firmware on which the issues should start, the September 13, 2016.”

Update 2: Online retailer wants to claim damages from HP for not allowing use of non-HP ink cartridges

29th of September, two weeks later, after a lot of press attention:

Update 5: HP apologizes for rejecting non-HP cartridges and is working on a firmware update

A temporarily workaround is flashing firmware from 2014 but, according to 123inkt, this can’t be easily performed by regular consumers. The retailer calls for HP to at least make the old firmware available to its customers.