The M402 series is available in capacities of 16GB, 32GB, 64GB,
and 128GB.  We thank Toshiba for providing an Exceria Pro MicroSDXC UHS-I 128GB
Card for our review (hereafter referred to as the Toshiba Exceria Pro 128GB).

The M402 series is a range of large capacity, high speed
MicroSD storage cards that can be used to add data storage capacity to many
modern electronic devices such as cameras and mobile phones.

The Exceria Pro 128GB uses the Secure Digital eXtended
Capacity (SDXC) format, which enables a capacity of up to 2TB, compared to a
limit of 32GB for SDHC cards. 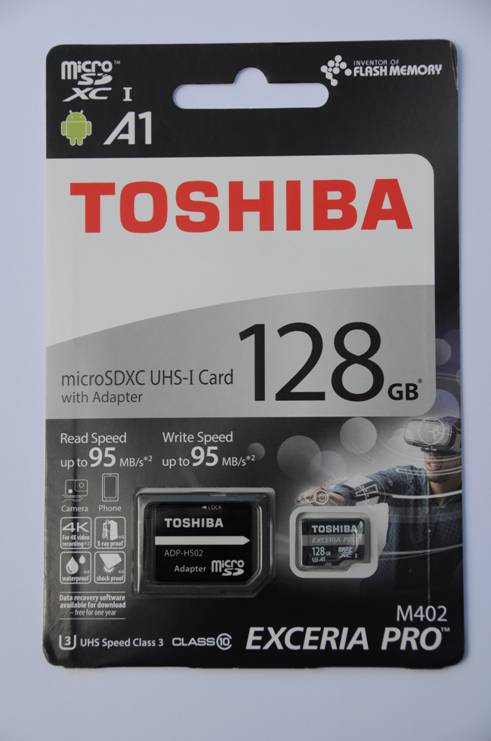 As you can see the packaging heralds the Exceria Pro 128GB’s
headline Read and Write Speeds of up to 95 MB/s.

You can also see that the Exceria Pro 128GB comes with a
MicroSD to SD adapter, which enables the card to be used in devices that
support the physically larger size SD cards.

The packaging also shows that the Exceria Pro 128GB is
classed as a UHS-I, A1, UHS Speed Class 3, Class 10 product.

Let’s pause for a moment to see if we can understand what
all of these classifications mean.

So, I imagine Toshiba includes the lower speed Class 10
designation to make sure that the consumer does not exclude the Exceria Pro
128GB as a compatible choice with devices that state they require a Class 10
card.  I suppose Toshiba could also classify the Exceria Pro 128GB as belonging
to the V30 Video Speed Class but I imagine they have not done so as the Video
Speed Class is not widely used (at least not yet).

This is how Toshiba positions the M402 series – 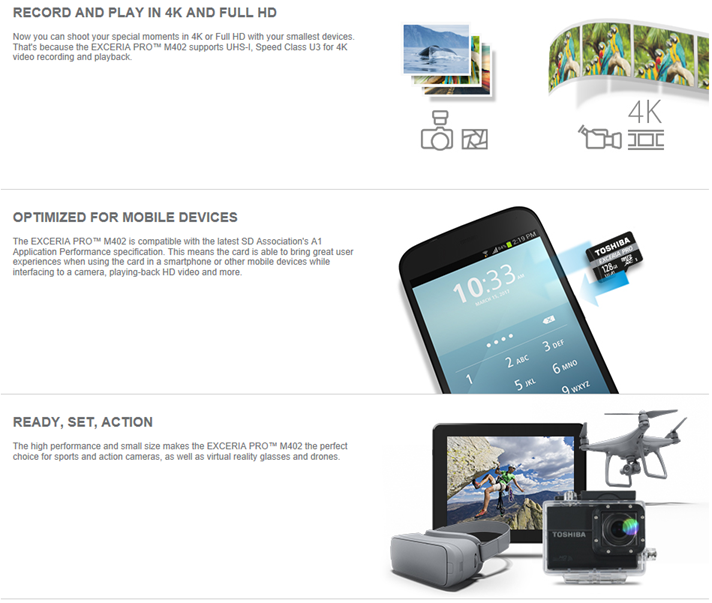 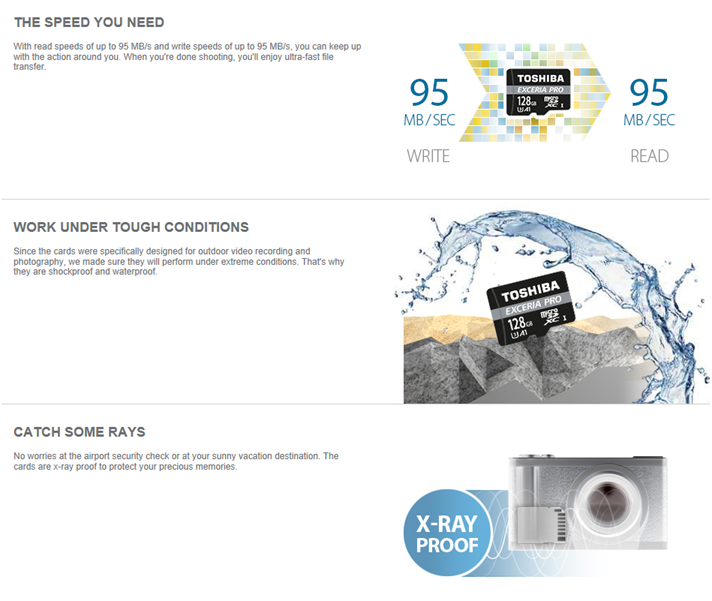 Here is Toshiba’s specification for the Exceria Pro 128GB – 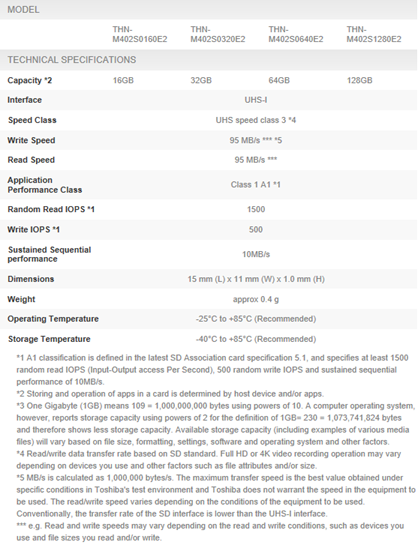 Here is a picture of the Exceria Pro 128GB plugged directly
into my USB 3.0 card reader (which I used for testing the card with my Desktop
PC)- 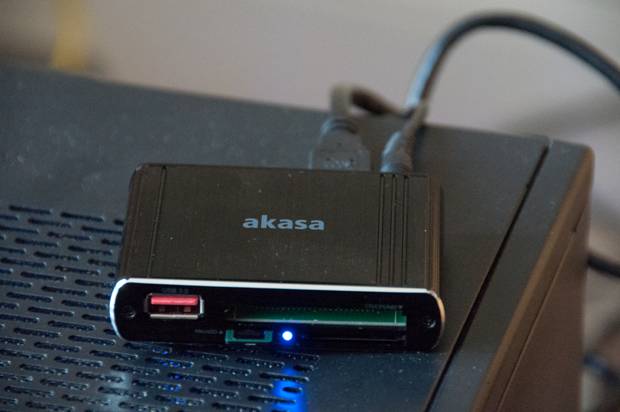 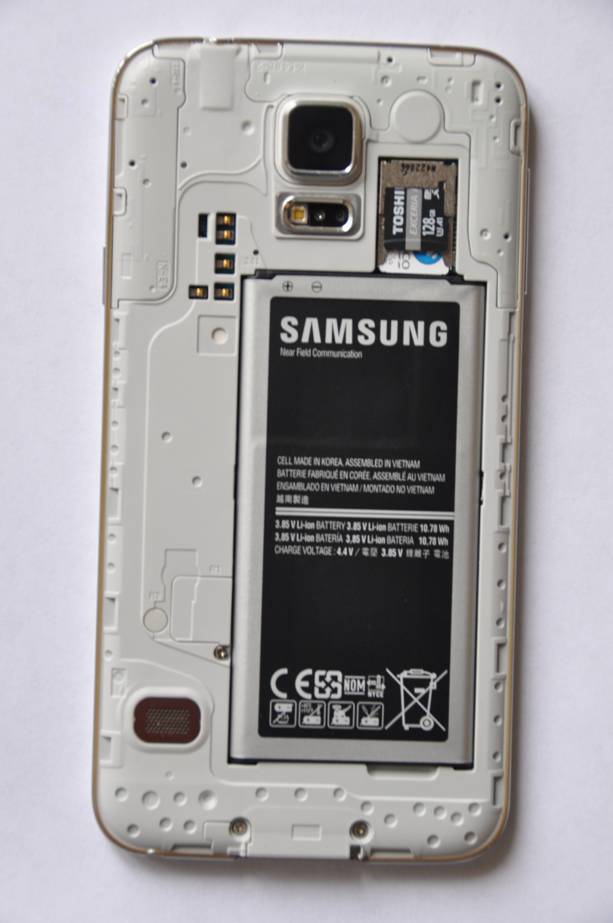 I used two
platforms for my performance testing:

Firstly, a Z170 based Desktop PC, running
Windows 10 with a Core i7 6700K processor over clocked to 4.7GHz. I plugged the
Exceria Pro 128GB directly into an Akasa Pontos XI USB 3.0 card reader, as
pictured above. 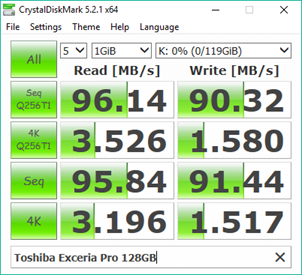 You can see that the sequential read results exceed
Toshiba’s ‘Read Speed up to 95 MB/s’ and the sequential write results fall
slightly short of 95 MB/s. 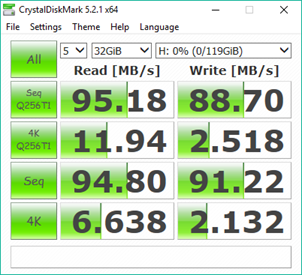 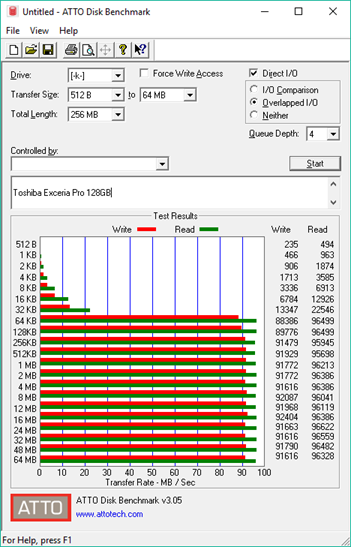 I used two performance benchmarks on the Galaxy S5. Firstly,
the PCMark for Android Storage benchmark and secondly, the A1 SD Bench. 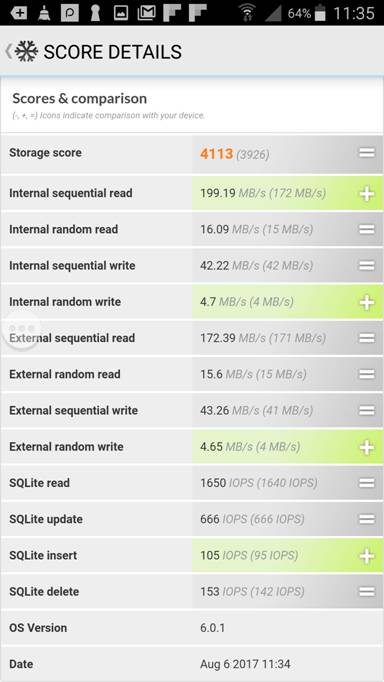 This is a screenshot of the PC Mark for Android Storage
Bench results.  You can see it includes results for the phone’s Internal
storage as well as results for External storage (the Exceria Pro 128GB). It
also includes the IOPS (IOs per Second) for SQLite database operations (SQLite
is used by many Android applications).

Interestingly the External Sequential Read result is 172.39
MB/s, which is way higher than the cards claimed top speed of 95 MB/s. However,
no doubt this result is evidence of caching by the Galaxy 5’s storage system. If appropriate the A1 SD bench will flag a result as being
achieved through caching. In this example it hasn’t and sequential speeds recorded
are – 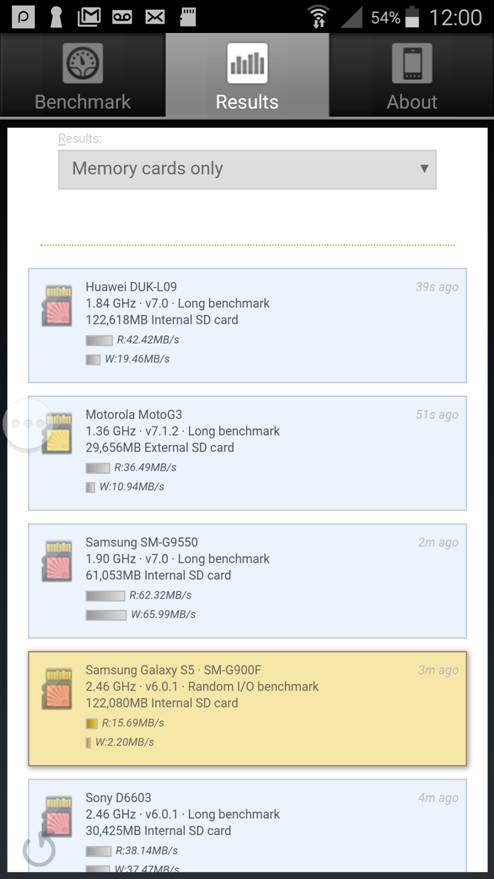 You can see that the Random IO results were –

So, the sequential results found
with the Galaxy S5 are slower than those found with the Desktop PC, but the
random results are slightly better.  I must admit that I have limited
experience of testing using Android devices but I would imagine that the
results found using a newer phone, such as a Galaxy S8 (with its more powerful
processor), could well be faster.

What our testing does show is that the Toshiba Exceria Pro
runs quickly in a Galaxy S5, and that it is most unlikely to be a limiting
factor in the performance of any current mobile phone.

My testing showed that Toshiba’s specifications of up to 95
MB/s for sequential reads and 95 MB/s for sequential writes are reasonable;
though one should note that it depends on the test platform used for testing.
My testing also showed that Toshiba’s sustained sequential performance of 10
MB/s appears to be a massive understatement and I suspect this specification is
more about qualifying the M402 series for the A1 Application Class than
anything else (i.e. 10 MB/s is the minimum that could be stated).

Pricing for the Toshiba Exceria Pro 128GB was unavailable at
the time of publishing this review; although assuming Toshiba hits a
competitive price point I am confident it will find many happy customers.

I am pleased to award the Toshiba Exceria Pro 128GB our rating
of ‘Excellent’.